Associate Professor of Political Science and African American Studies Brown served as moderator for the Oct. 27 Indiana gubernatorial debate. She discussed her moderating experience with The Exponent. Beyond the debate, Brown was quoted in an Associated Press story about the issues of structural racism that elected officials face. She also wrote a column for The Grio about the work and political activism of Black women that helped propel Kamala Harris to the vice presidency

Implications of the Breonna Taylor case

In a Louisville Courier-Journal story, Associate Professor of Political Science Valeria Sinclair-Chapman talked about the shooting death of Breonna Taylor, how it impacts the Black community, and how decisions related to the case might affect the political future of Kentucky Attorney General Daniel Cameron.

- Democratic presidential and vice presidential candidates Joe Biden and Kamala Harris continue to deflect when asked if they would try to add more justices to the Supreme Court. Nadia Brown, an associate professor of political science and African American studies, talks about the pattern of deflection.

As tens of thousands gathered for the March on Washington, Indiana residents watched and talked about the right to vote. Nadia Brown, an associate professor of political science and African American studies, talks about the march and the importance of voting. This had 366 media placements.

On Tuesday, October 3, 2018, four Purdue scholars gathered to provide their insights on the events leading up to and following the violence in Charlottesville. The event, entitled “After Charlottesville: Confronting Racism in America,” was inspired by the day of brutal confrontations occurring in the Virginia city during the weekend of August 11. As the nation watched, white nationalist groups incited altercations with anti-racist counter-protestors, which resulted the deaths of three people. In the subsequent weeks, the nation has grappled with the rising voice and visibility of hate groups. Therefore, the Teach-In was designed to bring the Purdue community together to shed light on what happened, why it happened, what can be done to prevent it in the future.

Prof. David Atkinson, an associate professor of history and a specialist in white supremacist movements, provided background on contemporary white nationalism and its use of social media for recruitment. Prof. Carrie Janney, professor of history and a Civil War historian, debunked the myths associated with Confederate history and talked about the significance of Confederate monuments in white nationalist movements. Dr. Valeria Sinclair-Chapman, director of Purdue’s Center for Research on Diversity and Inclusion and associate professor of political science, showed how racist symbols function in various political contexts. Dr. Ronald J. Stephens, professor of African American Studies and scholar-activist specializing in the history of Black Power movements in the U.S., theorized a new way to interpret white supremacy in the post-Obama moment.

Each panelist gave an engaged presentation that promoted interest and dialogue among the nearly 200 audience members. To encourage further dialogue, a follow-up event is planned for later this fall.

Dr. Khabeer participated in an online forum called “Islamon Trial” the forum  was published in the Boston Review. Her response focuses on the
double burden of being Black and Muslim vis-a-vis the national security state.  See link below:

Dr. Kim Gallon, assistant professor of history and African-American Studies, received the Jon C. Teaford Award for Teaching Excellence.  Kim's work in the history department specializes in African diaspora, gender, sexuality, and journalism history. She is the founder and director of the Black Press Research Collective and an ongoing visiting scholar at the Center for Africana Studies at Johns Hopkins University. Kim's work has been published in History Compass, Journalism History, Transformations, Pennsylvania Magazine of History and Biography.

Congratulations Dr. Nadia Brown on your promotion to Associate Professor.

Congratulations Dr. Marlo David on your promotion to Associate Professor.  And your new publication Mama's Gun.

Ferguson Teach In part II see J&C comments on the event below.

The crowd at the Ferguson Teach In, sponsored by African American Studies and Diversity Resource Office 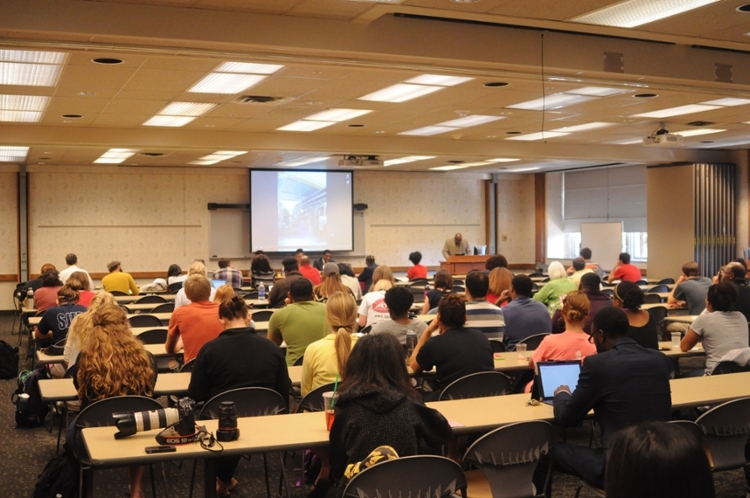 Idlewild: The rise and decline of an American resort town- Dr. Ronald Stephens

Hanna kids get hands on experience with Math and Science.

Nadia E. Brown, assistant professor in political science and African American Studies at Purdue University is the author of "Sisters in the Statehouse: Black Women and Legislative Decision Marking"

“Philosophy Born of Struggle is the precursor to what the Caribbean Philosophical Association has built on. It made the clear case that in addition to doing important work, it is important to build institutions that will nurture it. Professor Harris is a pioneer and consistent leader in that regard.”

The event will be on Tuesday, Oct. 1, at 6:30 p.m. at the Hamblin Hall of Flags on LHU campus, the event is free and open to the public.

Dr. Su'ad Khabeer will join African American Studies with a joint appointment in Anthropology this fall.  Welcome aboard Dr. Khabeer.

Dr. Cornelius Bynum new book A. Philip Randolph and the Struggle for Civil Rights was released December 2010.  Dr. Bynum is an Associate profession in the Department of History at Purdue University.