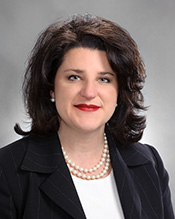 Jennifer Ping, a life-long resident of Indiana, is a principal of Bose Public Affairs Group (BPAG) and Managing Director of Strategic Business Services. Ping brings several years of experience in government relations to the firm and focuses her practice on legislative and executive branch lobbying, state and local procurement, political consulting, grassroots and grasstops consulting. She is also a principal in Bose Government Strategies, LLC (BGS) focusing on government regulatory consulting.
Prior to joining BPAG and BGS, Ping served as principal of both Bose Ping Governmental Strategies and Tabbert Hahn Ping Global Strategies where she assisted clients in several capacities, including lobbying and legislative monitoring, issue management, administrative and regulatory affairs, government procurement contracts and other client advocacy matters.

Vice President Mike Pence named Ping a Sagamore of the Wabash, the highest state governmental honor bestowed upon a civilian. Ping also is a 2016 recipient of the Indianapolis Business Journal’s Women of Influence Award and the Professional Women in Advocacy named her a finalist for the Excellence in Advocacy awards in 2015. In 2012, she was named Member of the Year by the National Association of Women Business Owners – Indianapolis Chapter.  Purdue University recognized her as the distinguished recipient of the 2011 Purdue University Emerging Voices Award for outstanding young alumni from the College of Liberal Arts. In 2009 and 2010, Ping was recognized as an honoree of Indy’s Best and Brightest by Junior Achievement. In 2003, she was an Indiana Woman Visionary Award nominee for her leadership with the Indiana Schools SMART Partnership.

Ping is immediate past chairwoman of the Marion County Republican Party – where she was the first female elected to that post. Ping served as campaign chair and finance chair for the Sue Ellspermann for Lieutenant Governor Campaign. She is vice chairwoman for the Marion County Republican Central Committee and vice chairwoman of the 7th Indiana Congressional District for the Indiana State Republican Party. Ping is also the Chairwoman for Women for Pence Coalition for Indiana Governor Mike Pence. Ping is past president of the Indiana Federation of Republican Women. She was an elected delegate to the 2008, 2012 and 2016 National Republican Conventions and served as co-chair, Indiana Women for McCain in 2008. She is a 2006 graduate of the Richard G. Lugar Excellence in Public Service Series and in 2006 was the Republican candidate for Marion County Auditor. Ping served four years on the Marion County Alcohol Board.

Ping is very active in her local community. She serves on the boards for the Purdue University College of Liberal Arts, Community Health Foundation,  and the Richard G Lugar Excellence in Public Service Series as well as serves on the Council of Ambassadors for the 2017 American Cancer Society Discovery Ball. Ping is a member of the Government Affairs Society of Indiana, the Greater Indianapolis Republican Women’s Club, and the National Association of Women Business Owners, where she serves as co-chair to the Government Affairs Committee. Ping is co-chair of the First Lady’s Luncheon for First Lady Karen Pence. Previously, she served on the advisory boards of Keys to Work, LLC. , and the Indianapolis Black Chamber of Commerce, and is a former trustee and secretary for the Central Indiana Cancer Support Community.