Scholarly Analysis of the Kennedy-Nixon Debates

The scholarly analysis of the Kennedy-Nixon debates covers how scholars have debated the significance and ideas of the 1960 election year and how those ideas and perceptions have changed over time.

The four 1960 presidential debates with John F. Kennedy and Richard Nixon were the first televised general-election presidential debates and brought new criteria to the presidential candidates campaigning. The first Kennedy-Nixon debate captured over 65 million viewers resulting in a major impact in the election's outcome and outreach. However, the hope of attracting more potential voters and increasing education of the issues was overcome by the interest of politicians catering to public image and using media exposure to build credibility and create more personality. The idea that these debates are a crucial point in political history and were the catalyst to the role in television and use of debates in the electoral process is still a debate that many scholars argue over.

The Impact of Television

One of the most discussed issues with the 1960 debates was the notion that people who listened to the radio were more likely to vote for Nixon while people who watched the debates on television were more likely to vote for Kennedy. One of the explanations to this phenomena was presidential candidates physical appearances during the debates with Kennedy appearing better on television than Nixon. 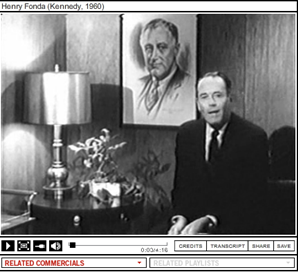 Nixon's use of television was different than Kennedy's personality based ads. He chose to film in a formal office setting with himself leaning on a desk to focus more on policy and keep things professional. Contrary to popular thought, Nixon did know how to use media to his advantage for example, his 1952 "Checkers" telecast that won over the American people.

Along with the role of television, the desire for a candidate to look as good as they speak became more relevant. Nixon learned this the hard way during the first debate on September 26, 1960.

Demonstrated in this video from C-SPAN's 50th Anniversary of the 1960 Debates, William Wilson, former media adviser for the Kennedy Administration, remembers the important role appearance on television played in these debates and the candidates reluctance to want to use makeup. 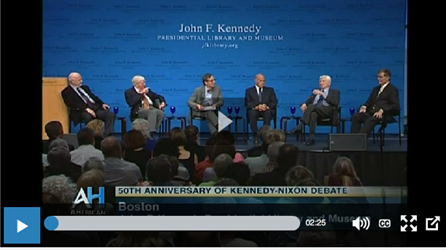 Nixon showed up wearing little makeup and a light grey suit, which blended into the background. He was constantly wiping sweat off his face and according to the audience looked exhausted and pale. Not only was Nixon's physical appearance an issue, but Nixon kept looking at a clock, which television viewers could not see making him appear shifty-eyed. Unknown to the general public at the time, Nixon's extensive campaigning left him physically exhausted, disheveled and made him lose about 15 pounds. After the devastating effects from the first debate, Nixon slowed down his campaigning and regained his healthy appearance.

Each presidential candidate had a premeditated and self-conscious campaign during the 1960 elections with the aspect of Kennedy wanting to build momentum and Nixon wanting to step away from the "tricky Dick" persona. Nixon wanted to focus on foreign policy and wished to step away from his reputation as sneaky, while Kennedy, only 43, was trying to combat the ideals he was too young or politically immature.

Kennedy would arrive into the studios to prep for the debate hours before to check out the conditions, lighting and even the temperature of the room. Before the second debate Kennedy arrived earlier to access the studio and noticed that the temperature had been set to 64 degrees, to help with Nixon's sweating, and more lights shined on Kennedy than Nixon. After some compromise the conditions were changed. The audience did notice that Nixon's physical image was much better for the second debate compared to the first. However, the rest of the debates were written off as ties with no declared winner. Being more concerned with appearance, both Nixon and Kennedy relatively had the same experience and stance on issues. Leading the debates to have some artificial personal attacks; however, they were both too concerned with personable likeableness to get into "gutter politics."

Over the years, scholars have adapted and changed their ideas of the debates based on new information. They learned exactly why Nixon looked exhausted and how much effort was exerted into the campaign on both ends. The Kennedy-Nixon debates were only aired once at a time when DVR was not even in concept yet, so this brings into question the validity of the impact of the debates on the viewers. Some scholars take a technological determinism approach to the debates referring to them as television's inevitable takeover of politics, while others say that it was the candidates reaching out to new mediums and taking advantage of the publicity opportunities. Regardless, the question of the infamous impact of these specific debates will continue to be a widely discussed topic among scholars.