Member of the Nandom Youth for Peace and Development 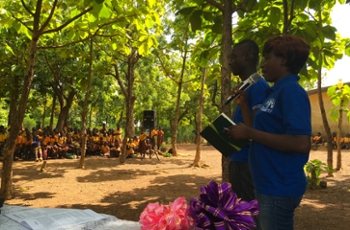 When Freda Pigru learned about the work of the Nandom Youth for Peace and Development (NYPAD) in the Upper West Region of Ghana, it seemed like a perfect match. As the station coordinator for Radio FREED, a community radio station in the Upper West, Freda attended a town hall meeting hosted by local peacebuilders and found herself enthralled by what she was hearing.

“As a community radio worker, my main interest is giving voice to the most marginalized in our communities and to also work directly with the people at the grassroots, the people in the communities,” Freda said, “[NYPAD] was exactly my passion and what I love to do as a community radio worker. The peace concept was so important to me and I just couldn’t help but getting excited about the whole NYPAD program.”

Since that date, Freda, now the public relations officer for NYPAD, has been involved in a variety of activities along with others to build peace in the Nandom area, particularly related to land disputes and preventing violence before, during, and after Ghana’s 2016 national elections. These efforts have included community outreach, radio programs, and inter-community soccer tournaments, among others.

For Freda, some of the most impactful experiences have been moments where community members came to important realizations about conflict. Such was her experience at a community forum related to a land dispute between two communities in 2015.

“The youth realized that we are the ones that will be used to go in to fight in place of our fathers. The women realized that anytime conflict comes up we are the most affected and yet we keep quiet about these things and allow the men to go about, destroying our lands, destroying our future, and the future of our children,” Freda said. “I really felt touched that we were able to take part in that moment of realization – that we helped women and the youth to realize the importance and the need for peace in the communities, to stand up and speak up the truth to bring about peace in the communities.”

Freda feels proud to be part of efforts to build peace in her community and hopes to see NYPAD grow in the future from an “infant” organization to a large and recognized force for peace in the Nandom area and beyond.

“For me, the most important of it all is that we have an avenue where we can solve our own issues, we can meet up to discuss our own problems before they get to the worst of it,” Freda said.

Through her involvement with NYPAD, she believes she has learned to stand up for herself and for others, particularly the marginalized.

In particular, Freda looks to the late Madam Rosaline B. Obeng-Ofori, the PPP’s West Africa Program Manager who passed away in fall 2016, as a source of inspiration for NYPAD’s work going forward.

“The late Madam Rosaline has been a motivator. She has motivated us and has really been our guide throughout this and we hope to continue the cause in her name and in the name of all those who have contributed to the work of the Purdue Peace Project internationally and to also promise that we wouldn’t let the spirit of the Purdue Peace Project die just because we have lost the late Madam Rosaline,” Freda said. “We are going to work with the virtues that she taught us to always be truthful, be factual, and stand by the principles we believe in as NYPAD.”