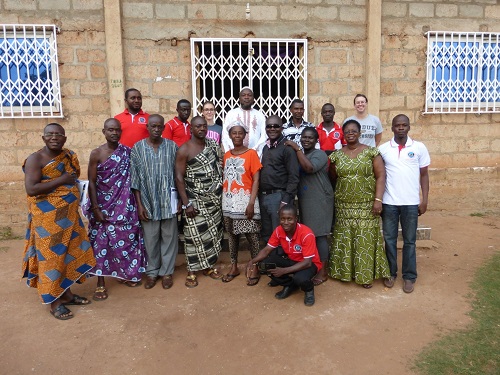 The Tuobodom Peacemakers Committee, a group of local citizens that works towards promoting peace in Tuobodom, Ghana, has begun to plan and implement activities as part of their peacebuilding program in this area.

Following its formation during an actor meeting in August 2016, the Tuobodom Peacemakers Committee has been meeting regularly to strategize best ways to bring and sustain peace related to a chieftaincy dispute in Tuobodom. They came up with several outreach strategies, including door-to-door interactions to let locals know about the committee and the need for peace, visits to religious institutions, media programs, a peace march, and visits to local chiefs.

Implementation of some activities has already begun. In early fall, the peace committee visited several local churches to spread the word about violence prevention related to the chieftaincy conflict that has been dividing local citizens living in Tuobodom for decades. In addition, members of the committee met with traditional leaders from the two opposing factions, the Abroman family chief and the Krotia family chief. During that meeting, the Abroman chief’s son, who expressed great commitment for peace to prevail in the town, entered the Krotia chief’s palace for the first time in his life.

Next, the peace committee members have been planning to talk to the families that lost their loved ones during the violence in past years. They also hope to consult with market women and other community members about ways in which they can bring peace to the community.