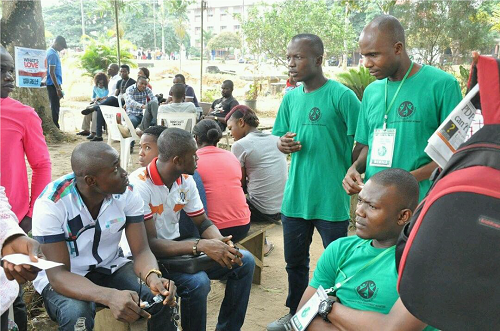 Growing up in Umuigwe Aluu, a small community in Rivers State, Handsome Kinikanwo had a flair for social justice. He states: “As a child growing up, I wanted to see a better society because I witnessed a lot of militancy.”

“I was called by a community youth leader and I promised to at-tend the PPP/HMI stakeholder meeting. Shortly after the call, I showed up,” he said.

The meeting brought together an inclusive group of community and university representatives who conversed about strategies to strengthen the university and host community’s relation-ship as well as ways to prevent the likelihood of political violence. The gathering led to the formation of Community Peace Development Initiative (COPEDI), a group of local citizens committed to locally-driven peacebuilding.

Since the formation of COPEDI in August 2013, Kinikanwo has remained committed to building peace in Port Harcourt. In his late 20s, Kinikanwo is the secretary of COPEDI. He also serves as the media coordinator of COPEDI’s media program. He shares his engagement with COPEDI, memorable experiences and lessons learned, as well as challenges and aspirations for his group in the following statement:

"I am the secretary of COPEDI, and the media coordinator of our radio program. The radio program educates the public about peace and the need for violent free election. We contributed to peace post-election in the state. We devoted the episodes of our radio program before, during, and after the just concluded general elections in Nigeria to the message of peace. COPEDI has given us an opportunity to reach out to people with messages of peace, and we provided opportunities for people to phone into our radio peace program. In collaboration with other members of COPEDI, we brainstormed on the topics for our weekly talk show. By participating in COPEDI, I have learned the importance of working with others, as well as the importance of accountability and documentation. Despite the challenges of limited resources and human development that we currently face, I see a brighter future for COPEDI, and remain committed to the cause of peacebuilding."

Kinikanwo shares the impact of COPEDI’s program on political violence prevention in this way: “I hardly hear of any Not for Profit talking about peace during, after or before the election. But our talk on radio gave people an opportunity to talk about peace. After the governorship election there was no protest, at least we witnessed peace post-election and I think COPEDI contributed because we were at the fore-front of advocating for peace in the state through our weekly radio program.”

In addition to contributing to peace in Port Harcourt, participating in COPEDI has also brought public attention to Handsome and other members of the group. He says: “COPEDI has made us popular in the community and we receive commendations from friends and community leaders because of our week-ly radio program. I have memorable experiences from participating in COPEDI. For example, after the inauguration of COPEDI in March 2014, I received accolades from my community Development Chair-man, and the university representatives because of the welcome speech I made. COPEDI has also provided me the skill to appear on the radio to preach the message of peace.”