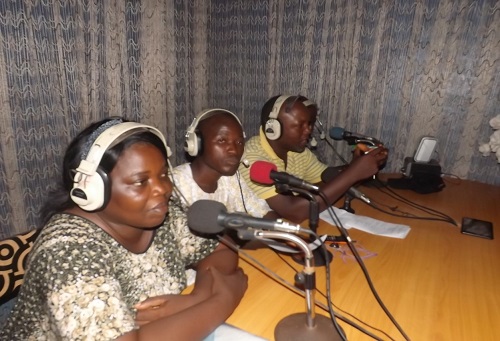 Kuku Yeanay was one of the very first members of the Pen-Pen Peace Network (PPPN), a locally led peacebuilding group in Liberia whose initial work involved finding ways to overcome violence and tensions between the local taxi drivers on motorbikes (also called pen-pen riders) and the Liberia National Police (LNP).

Since 2013, Kuku has played an active role in informing commercial motorcyclists about their rights as well as how they should obey traffic rules in Liberia. Together with other PPP members, she has been active in initiating and promoting various strategies and tactics to overcome conflicts between the police and pen-pen riders. She speaks fondly of the work that PPPN has been doing in order to bring the two groups together to engage in a peaceful dialogue. As she notes: “Normally, in Liberia police and riders were not friends and there was always a tension. […] It was amazing to bring them together [so that] they can talk to one another and shake hands and say we’re brothers and friends, and do activities together.”

She recognizes that her peacebuilding work with the PPPN has not always been easy. “Changing people's minds is a process. […] To win someone over you have to take time to talk to them. As a peace worker you cannot get angry with them, you must be very kind.”

In addition, one project activity that Kuku has been involved in has been educating pen-pen riders in Liberia about personal hygiene during the time when Ebola hit her home country two years ago. Kuku admits that at first pen-pen riders were skeptical of the existence of Ebola in Liberia. For her and the rest of the PPPN team it was important that these taxi drivers recognize the dire need for taking health precautions themselves. “The riders’ families and the nation depends on them so it is important that they take care of their own health.” After taking the streets day and night and by informing local citizens how they could protect themselves against this deadly epidemic, their campaign turned out to be successful, says Kuku.

Kuku and other PPPN members are currently involved in organizing various activities and events (such as town hall meetings, peace marches, soccer tournaments, games, and radio talk shows, to name a few) to promote peace during the 2017 presidential elections in Liberia. “Once you've decided to be a peacemaker, you must always be a peacemaker,” Kuku adds. “You’re molding the minds of people, and it takes time. [...] We should be patient with each other and work hard to see peace in our country come 2017.”